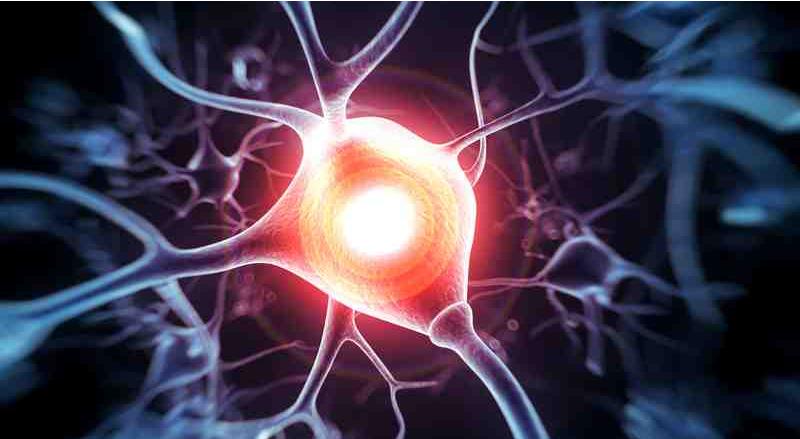 Sciatica is a complex problem that many of us have either experienced, or know someone that has.  “Sciatic pain” however, is not just one problem but an umbrella term used to describe many 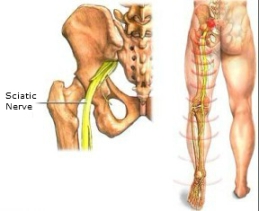 different problems that cause the sensation of nerve pain in the area of the body controlled by the sciatic nerve.

Nerve pain can be caused by any irritation of a nerve either through compression, excessive or prolonged stretching, damage due to trauma, local chemical changes or even interference from scar tissue.

Nerve pain can feel different to different people and can be in different areas for different people, with either hot or cold feelings, pins and needles or numbness, sharp or shooting pains or even loss of power to muscles.  These differences are dependent

The reason why sciatic pain can be caused by so many different problems is because the path of the sciatic nerve can be affected by multiple structures.
The four structures that are mostly responsible for sciatic pain are:

The Spine
When our nerves travel from the spinal cord and leave the spine, they must pass through small holes between vertebrae.  These holes (foramen) can be narrowed by different variables such as repetitive poor movement patterns, degeneration of joints, dehydration of spinal discs or disc protrusion.

The Pelvis
The lowest segment of the spine, the sacrum, also has small holes through which nerves emerge to service our legs.  If the sacrum is not gliding correctly through movement or there is poor alignment of the pelvis, these nerves can be affected.

The Muscles of the Leg
Scar tissue and a history of damage to muscles close to the sciatic nerve can cause adherence to the nerve itself and lead to pain.

Due to these multiple causes, there are multiple solutions to what seems as though it is the same problem.  What may be beneficial for your relative or friend with sciatica, may not be as effective, or may even be detrimental to your own situation.  This is why it is important to consult your physiotherapist, who will perform a thorough examination, to determine which problem is attributing to your nerve pain and create a program tailored specifically for you.

Power and Strength are useless without Stability and Control

Big flashy muscles might be attractive but as any physio will tell you, they are next to useless without core stability.

Thankfully the health and fitness industry has now started to embrace the need for core stability, but still few people really understand the concept and what it means.

Essentially our bodies have hundreds of different muscles that all perform important tasks and the very conspicuous Abs, Glutes, Pecs, Delts and Biceps (amongst others) are there to provide strength but they are supported by a plethora of smaller, less conspicuous muscles that provide stability. 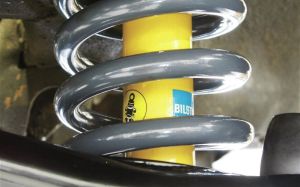 These are generically referred to as the ‘Core Muscles’ and the best comparison we can think of is with automotive suspension systems.

If the ‘Strength’ muscles are the springs then the ‘Core’ muscles would be the shock absorbers.  They are usually less conspicuous, sometimes even hidden within the springs but without them your car would fall apart in no time.

The same goes for humans.  Good strength muscles alone won’t keep you running smoothly. Without good core stability you’ll be in for lube and servicing (physio) all too often and eventually you’ll be off to the scrap yard before your time!

When it comes to spinal stability, the most important muscles are the multifidus, pelvic floor and transversus abdominis. As shown in the image to the right, these muscles form a supportive cylinder around the spine. The transversus abdominis is like a corset around your abdomen and it sits deep underneath all the “six-pack” muscles.  It attaches the lower ribs, diaphragm and lumbar spine to the pelvis.

This ‘core’ stabilises the spine and allows the load of movement to be evenly distributed between all the intricate joints of the spine. Just like a car suspension system, it reduces the shock through the joints and thus reduces wear and tear which would, over time, lead to conditions such as arthritis or bulging discs.

Doing exercises like sit ups is useful to strengthen the big “six-pack” muscles, but doing this exercise without good core stability will lead to excessive load through the joints of the spine and can lead to injury of the spine.

So in that respect it is important to activate and strengthen the core before you start on a regime of strength building.

Another example is the shoulder. The “delts”, “lats”, “pecs” and “biceps” look fabulous but they are not the stabilisers of the shoulder.

Over training of these without attention to the deeper, core stabilisers of the shoulder can result in injury as a result of an increased load being put through the system without the appropriate “suspension”, so to speak.

See our blog on ‘Shoulder Stability’ for a series of simple exercises to build core shoulder stability.

Each area of the body  has a “core” component.

Feet have intrinsic muscles that operate in balancing.

Ankles rely on hip and foot stabilisers for control.

Knees similarly need good hips and feet to be protected.

and even Necks have a deep system of muscles that control movement.

In essence, the core muscles play a crucial a role in overall well being and strength. Without the stability and control provided by the deeper core muscles, the power and strength gained from training is useless!!

Stay tuned as our series of CORE STABILITY blogs will introduce the specifics of core training for different parts of the body and the common areas of overloading we see in fitness regimes!

The key to a healthy, pain free and strong shoulder is a stable scapula (or shoulder blade) which is the base from which all shoulder movement occurs. It is the bone where the “socket” of your shoulder is found and to which the “ball” of your upper arm (humerus) connects.

The following exercises are very effective for improving scapula stability and therefore improving shoulder function. Please keep in mind that you should never have pain during or after doing these exercises. If you do, please consult a physiotherapist before continuing.

#1.Scapula clock: Stand close to a wall with your elbow bent. Place your hand on a small ball on the wall just below shoulder height. Roll your shoulder blade back and down and hold it set in this position.

Make circles alternating from clockwise to counterclockwise with your hand on the ball while maintaining your shoulder set. Repeat 10 times each way. 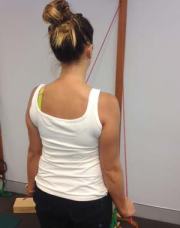 #2. Pull downs: Using a cable or theratube secured above you.

Pull down with straight arms to the side of body and simultaneously draw your shoulder blades back and down to feel muscular squeeze in the middle part of your back just below the shoulder blades. 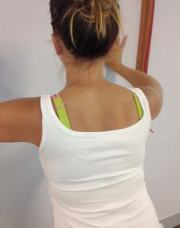 Stand with feet together and away from wall so you are weight bearing through your arms and hands.

Do slow push ups on the wall being mindful to keep the shoulders back and down as you press toward wall.

As you press away from the wall roll the shoulder blades around the ribcage to arch the upper spine.  Repeat 10 times.

Take weight forward so your nose is in front of your fingertips. Bend elbows and take shoulders down away from your ears.

Keep shoulders back and down and maintain stability on one arm as you lift the other out in front.  Repeat on the other side and do 5-10 repetitions.

#5. Roll out on ball: Assume start position as pictured.

Ensure shoulders, hips and knees are aligned and support weight on hands.

Slowly roll the ball out in front of you, keeping your body aligned and extend the arms away from the body to allow the elbows and forearms to rest on the ball.

Maintain shoulder blades down and back. Repeat 10 times.

1)    Ensure the foot is directly in line with the leg. Toes not turned out as is often the case.

2)    To get an effective stretch you need more pressure than just stepping backwards so press into a wall or bench with hands or forearms.

3)    Roll the heel backwards so the very back of the heel is on the ground and lift the toes just a little.

4)    Straighten the knee completely feeling tightness in the muscles above the knee, lifting the knee cap.

Hold the stretch for at least 30 seconds to get effective lengthening through the entire length of the calf muscles.

Note : in the case of Achilles tendonitis this is not suggested as it tends to aggravate the tendon.

When we sit for extended periods at a computer neck pain and headaches are common. These symptoms are worsened with the use of a lap top due to the increased hunching over that is caused by the proximity of the screen to the keypad.

Being aware of posture while sitting at the  computer is  the best prevention of the strain on the neck. Sitting with the lower back supported with a cushion etc. etc.

How to avoid pain from using a PC